“We always need new material in the pipeline”

Interview with Peter Ilsink (2nd generation) about the birth of sprayroses

How the sprayrose was born

At the moment the popularity of sprayroses is increasing rapidly. This is not surprising, as the product is extremely versatile, with its typical trademark of multiple rose blooms growing on a single stem. Strangely enough, the sprayrose wasn’t always that popular. We take you back to the early sixties, when Peter Ilsink (2nd generation) ran a tree nursery company together with his family, called ‘Darthuizen’, located in the heart of The Netherlands.

The time had come to start something new. Initially, the company had the idea of breeding a continious-flowering, ground-covering rose variety. However, Peter also had confidence in his abilities to breed cut roses. He decided to seek advice on this from Mr. M.Sc. Van Doesburg, principal of the former testing station at Aalsmeer. Together they reached a remarkable conclusion. The floricultural market was already acquainted with spray carnations and spray chrysanthemums, however, a spray rose had not been introduced yet! From that moment on, things moved fast. Various breeders were recruited including M.Sc. Adri van Doesum, who has been employed by the company for 32 years now. The ‘right blood’ for the sprayrose was taken from strong garden roses that did have multiple blooms growing on one single stem. The first sprayroses, called ‘Porcelina® and Evelien®, were bred in the early eighties, followed by the Lydia® range. Production started to take place on a larger scale in Japan, South-America, Kenya, Zimbabwe and The Netherlands. 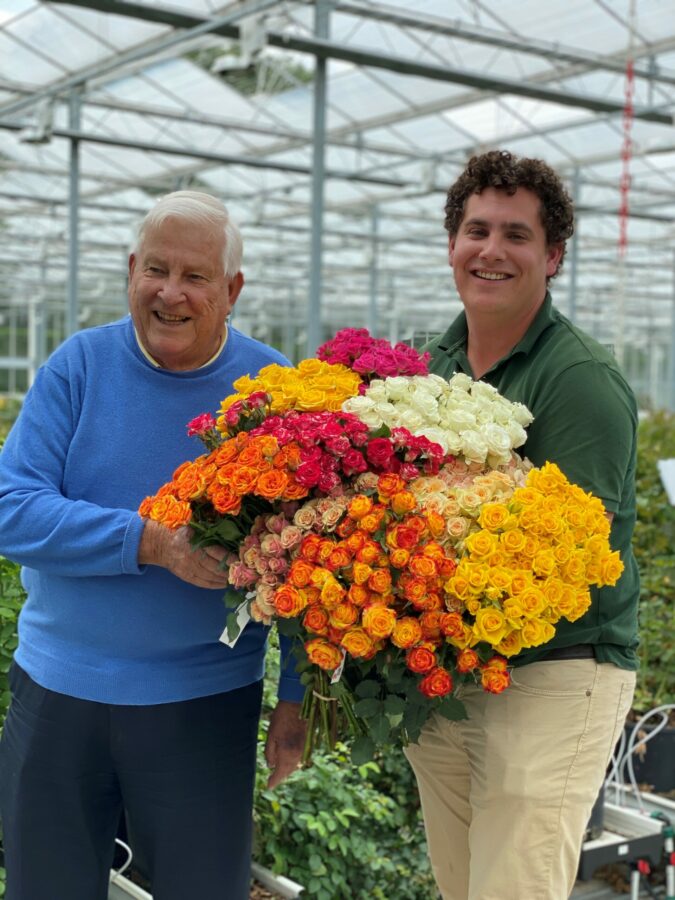 The revival of the sprayrose

Around 1995 the demand for sprayroses declined. The vaselife was not optimal and the production not fast enough. There were serious doubts about the sustainability of the sprayrose. In spite of these dark clouds, Peter decided to give it another chance. His passion and love for the sprayrose triumphed over doubt. Serious investments were made to improve the vaselife, transportability, production and vaselife of the sprayrose, with a goal of sustainability in the market. The assortment was expanded upon massively. ‘Innovating with patience’ as Peter calls it. More and more growers started to show interest in growing sprayroses. Around 2005, the sprayrose was well represented in the worldwide acerage of cut roses. Nowadays, a rose assortment is unimaginable without sprayroses. The sprayrose is still very popular for use in wedding arrangements. However, also simple arrangements such as putting a few stems on a vase, are often seen. Combining sprayroses with single flowers in a bouquet is also gaining popularity.

“The life of a rose breeder is too short”

In conclusion, we can say that the success of the sprayrose is a combination of factors such as passion in breeding, innovation, perseverance, patience and teamwork. As a rose breeder you always need to be on the move!  Rose breeding is like high level sport: one must ever be in motion and one must keep on renewing! Furthermore it is important not to be afraid to create trends yourself  “We always need new material in the pipeline” says Peter. In his opinion the life of a rose breeder is too short. “We are always working on developing new rose varieties and the job is never done”. The latter is not considered an obstacle for Ilsink. “The passion for the rose gives us the perseverance and creativity needed for this beautiful profession”.