Grandiflora Nurseries (Australia) and Interplant Roses recently celebrated their 30 years of partnership, that dates back to the year 1992. At the time, Mr Peter Ilsink, 2nd generation of the Ilsink Family contacted Mr Harry Schreuders, also 2nd generation of the family-owned company Grandiflora to inquire about plant breeders rights of Interplant varieties in Australia. No one would have guessed at the time that this was the start of a long lasting and great relationship between both breeders…. 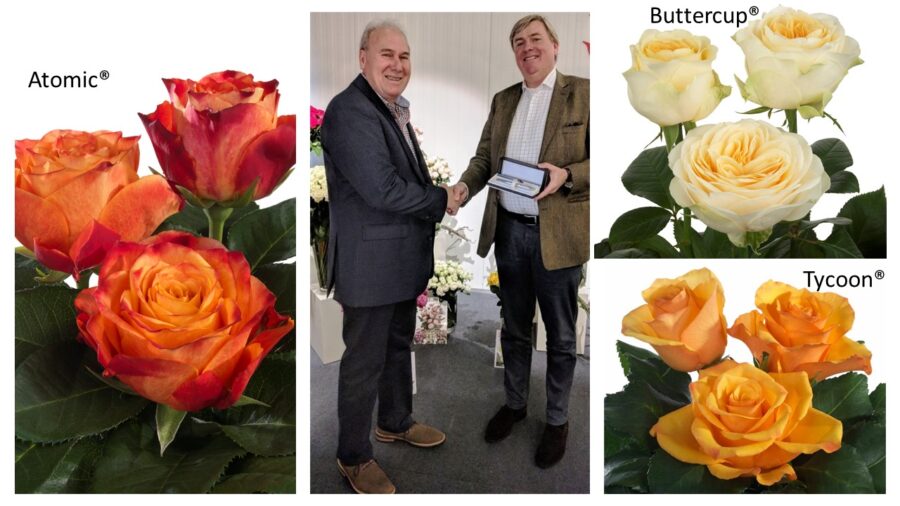 (author / copyrights Mr Harry Schreuders)
30 years ago, my recollection of the first contact with Interplant Roses was early 1992 when I received a phone call from Mr Peter Ilsink in the middle of the night, as there is a 10-hour time zone difference between The Netherlands and Australia.

Mr Ilsink, who, after introducing himself from the outset was cordial, articulate and direct to the point. Mr Ilsink was enquiring as to what the situation was of Interplant’s rose varieties in Australia. Mr Ilsink explained that he had been informed by a close colleague who was also known to me, that Interplant rose varieties in Australia were not appropriately protected by Plant Breeders Rights as was required by the then agent.

After I informed Mr Ilsink of the status of Interplant’s varieties in Australia the conversation concluded with Mr Ilsink’s comment: “I will be in touch”. Not 30 minutes had passed, and still the middle of the night, Mr Ilsink phoned again confirming that the information provided to him had been verified. He then requested that I personally, on behalf of Interplant, travel at the earliest possible opportunity to collect all of Interplant’s intellectual property, to which I agreed to do. Little did I know at that time, that the journey would take two days and 2,000 kilometres driving distance there and back.

Once all the Interplant rose stock had been collected and planted at Grandiflora, Mr Ilsink made his first trip to Australia during which time Grandiflora was appointed the Australian agent for Interplant Roses. Within a short period, several Interplant varieties were successfully introduced to rose growers and well received by florists throughout Australia. The introduction of Interplant spray roses was made in Australia in 1994 and over the coming years with new additions of Spray rose varieties expanding into an extensive assortment of colours, as well as others with innovative new flower shapes helped expand on their popularity, forging Interplant spray roses throughout the cut rose industry in Australia and worldwide.

From the beginning Mr Peter Ilsink was aware from our conversations that I, a cut rose grower, have a passion and keen knowledge of cut roses, varieties, their characteristics and attributes. Peter made a remark that I too someday might possibly consider pursuing rose breeding myself. That seed was planted in my mind and at that time a young businessman, I acted on his remark sooner rather than later.

It was on Peter Ilsink’s second trip to Australia, whilst visiting Grandiflora that he was shown the very first rose crossings hips in the company’s new breeding glasshouse, which took him somewhat by surprise. A few years on, an agreement was made with Interplant Roses representing Grandiflora bred varieties exclusively worldwide. Now two decades on with Interplant introductions and sales of Grandiflora varieties being made in more than 20 countries.

It was in November 1994 whilst attending the World Federation of Roses conference in New Zealand that I met Robert Ilsink for the first time and over the many years since have formed an enduring relationship.

From our initial contact and continued to this day our business relationship with Interplant Roses, and all three generations of the Ilsink family with Grandiflora has always been cordial, one of respect, trust, and for the professional development of roses.

As the original founding father of Spray Roses, Mr Peter Ilsink during the past three decades has been a mentor to me with many conversations had on roses and rose breeding, for which I am grateful and sincerely thankful for his sharing of knowledge so generously.