A talk with Ben Braam, who grows spray roses in Ethiopia

The spray rose: from wedding to year round product

Braam Roses, a Dutch family owned company in Ethiopia, was not only one of the first growers who started to grow spray roses on a large scale, they were also one of the first who discovered the advantages of harvesting the sprays at a more open stage. Since the very beginning, they are cooperating closely with breeder Interplant Roses and contributed to the change of the image from wedding to year round product, by selecting and introducing new and better spray roses year after year. The most recent varieties they introduced are Interplant’s  Leila, Cherokee and Sancerre. And according to Ben Braam, the owner of the farm, the reactions so far are very positive. 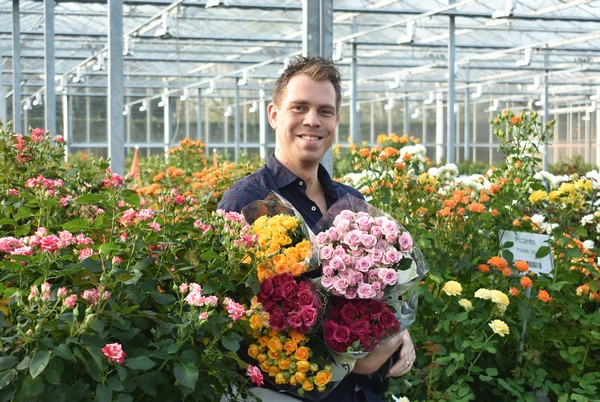 Ben Braam at the greenhouse of Interplant Roses in Harmelen, the Netherlands, holding the three new varieties – Leila®, Cherokee®, and Sancerre® which he brought from Ethiopia

One of the largest spray rose growers in the market
In 2009, Ben’s father Arie established Braam Roses in Ziway, Ethiopia and in the course of the years they expanded to 22 ha exclusively covered with spray roses. Now, they are one of the biggest growers in the market, supplying the Royal FloraHolland flower auction in Aalsmeer and providing work to over 650 people in Ethiopia.

A peek in the greenhouse of Braam Roses in Ziway Ethiopia and the area where they trial new varieties. Click here for the enlarged image.

Close cooperation with Interplant Roses
Braam has over 37 varieties commercially available and new varieties are continuously being trialed. As part of this ever ongoing and extensive search and selection program for new varieties they are in close contact with breeder Interplant Roses, an international (rose) breeding company with decades of experience in the breeding of cut flower roses, both single heads and spray (multi headed) roses. The head office is located in the centre of The Netherlands and they have their own test facilities in Kenya which Ben visits several times a year. Moreover, on a regular basis, Interplant and Braam perform mutual vase life tests of the spray roses and by doing so, an optimal condition of the product is guaranteed. For both parties this close relationship is beneficial as they both strive to introduce newer and better spray rose varieties year after year. “Our ultimate goal is to provide consumers the best quality and excellent vase life for long lasting enjoyment,” Ben says. 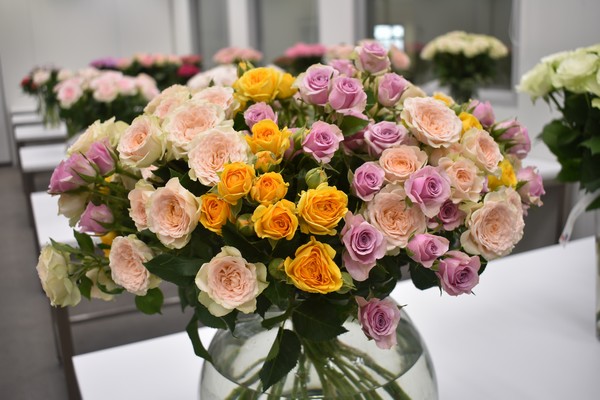 The three new varieties in a vase, in the vase life room at Interplant Roses.

The correct cut stage of the spray roses
Another good example of their close cooperation is the applying of the correct cut stage of the spray roses. Braam Roses was one of the first who decided to cut their flowers at a more open stage as they noticed several advantages. However, it was new to the market as spray roses were harvested mainly according to the prescribed auction regulations, which was at an early stage. Also Interpant saw the benefits and decided to conduct a research in 2019. It proved that the vase life of spray roses improves by at least 30% when the flower is cut more open and that it has a positive impact on the opening of the blooms and diminishes the percentage of drooping necks significantly. Ben was pleased that his approach was now proven to be successful on a larger scale. Afterwards, Interplant invested a lot of time and effort in communicating these findings to all links in the floricultural chain all over the world. “Now, the worldwide market accepted the more open cut stage,” says Robert Ilsink, CEO of Interplant Roses.

Ben presenting several varieties of his assortment in one bouquet.

From wedding flower to year round product
The research as well as the continuous improvement and introduction of new varieties resulted in a change of the spray rose image. “It used to be a wedding flower, so from November 1 till after Valentine’s Day, we saw a dip in sales. However, over the last years, we are seeing the demand increasing during these months. In the past, red was not a popular color for spray roses, but now, when heading towards Valentine’s Day, it is.” Actually, year round and across the board, he is seeing an increase in demand. “In the past, pastel colors were the main colors. Now, we see that both bright and soft colors are popular. People seem to have discovered the endless possibilities of spray roses and even  when we look at the strange year in which COVID-19 ruled, we still see a fair demand for spray roses.” All in all, Ben is very satisfied with the demand and sales of his spray roses. “Varieties that perform very well are Rubicon®, Trinity®, Eyeliner® and Fireworks®.”

New varieties
Recently, Ben introduced three new varieties to the market, namely Leila® and Cherokee® – which he introduced at the end of 2020,  and Sancerre® – which he introduced one year ago, at the ‘Aalsmeer Clock’. At the moment, he is the sole supplier of these 3 varieties at the Dutch auction and he is pleased with the reactions so far. “Leila has such a striking color, Cherokee is a color that we need to have and Sancerre has a very good production and stem length.”