Soon you will find here our complete assortment of #ashtag Flowers. By clicking on a photo you will find the trade name, stem length, vase life, flower production and colour description of each #ashtag rose. 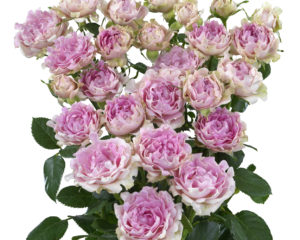 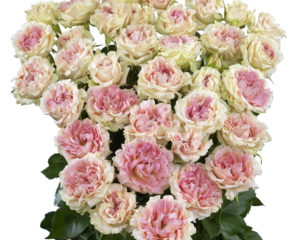 It all started in 1990 with the discovery in our garden rose trial field of a seedling with an unusual flower shape. This rose did not have smooth petals, it had ruffled edges. Although it did not show the ruffled pattern throughout the summer we were interested to know whether this characteristic had a genetic basis or if it was just influenced by the weather. With the first seedling generation that we bred, our excitement was tempered.

Only a few seedlings had some ruffles and it did not always show. We kept trying different parents and in our 1995 seedlings we found some exciting roses with ruffled flowers. The greatest disadvantage, however, remained. In the first flowering period the ruffles were present in almost hundred percent of the flowers, but in the second flowering period not only did this percentage of ruffles go down drastically, but also the degree of the ruffle became less.

During the following years we have been working on the stability of the ruffle characteristic in the garden roses. In 2006 we were confident enough to introduce the ruffled flower shape in our  cutflower program, starting with the spray roses. It took some years to breed this flower shape into a suitable cutflower rose.

In 2015 we selected a seedling, code T1090-15 among others. The following years we found out that people really liked this rose with its strange flowers, and in 2019 we decided to name these ruffle shaped flowers #ashtag Flowers.

Over the years, breeding on this ruffled flower shape has given us so much joy. Every year we got more excited seeing the first ruffled blooms in our seedlings. Today we are proud that we can share the first cutflower rose with ruffled flower with so many flower lovers worldwide. And…… for sure there is more to come, this is only the beginning!